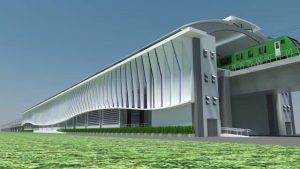 Philippines Department of Transport announced that six companies submitted their offer for the Contract Packages 4 and 5 of PNR Clark Phase 2 project, which is part of North-South Commuter Railway (NSCR).
Companies that participated in the bidding are EEI (Philippines), Acciona (Spain), GS Engineering & Construction (Korea), Posco Engineering & Construction (Korea), PT Waskita (Indonesia), and PT Wika (Indonesia).
For the project’s contract packages 1-3, bids were submitted by 11 international and local companies.
The package 4 consists of the construction of an 8-km rail section, including the station to the Clark Airport, while the package 5 envisages the construction of NSCR’s Clark Depot.
For the contracts, one local and five international companies submitted their proposals, reflecting “the solid support and trust of the international infrastructure industry,” PNR General Manager Junn Magno said.
PNR Clark Phase 2 is a 53-km section from Malolos, Bulacan to Clark, Pampanga, which forms part of the NSCR. This rail line will be country’s first express rail connection to the Clark airport, in Central Luzon.
PNR Clark Phase 2 is expected to enter services by 2022. This railway line will reduce travel time between Malolos, Bulacan and Clark International Airport to 30-35 minutes. From Buendia in Makati to Clark Airport the travel time will be reduced from 2 hours by car, to 55 minutes by railway. It is estimated that the new connection will be daily used by 340,000 passengers.
The Department of Transport also announced that by the end of this year, more contract packages are scheduled for bid submission and publication. These include bid submission for PNR Calamba Package 1, with 1 km including Blumentritt Station, on 05 November 2019. In the last quarter of 2019 rolling stock tender will be launched, which includes the procurement of 304 commuter train cars, 56 Airport Express train cars, and electromechanical systems.
The NSCR project will form a 148-km railway system served by 37 stations, with a total value of EUR 13.5 billion (PHP 777.55 billion). The NSCR project is co-financed by the Asian Development Bank (ADB) and the Japan International Cooperation Agency.
ADB announced a USD 2.75 billion loan for Malolos–Clark railway project, that has received the first USD 1.3 billion tranche in July.
JICA will provide a USD 2 billion loan for the procurement of the needed rolling stock and the railway systems.