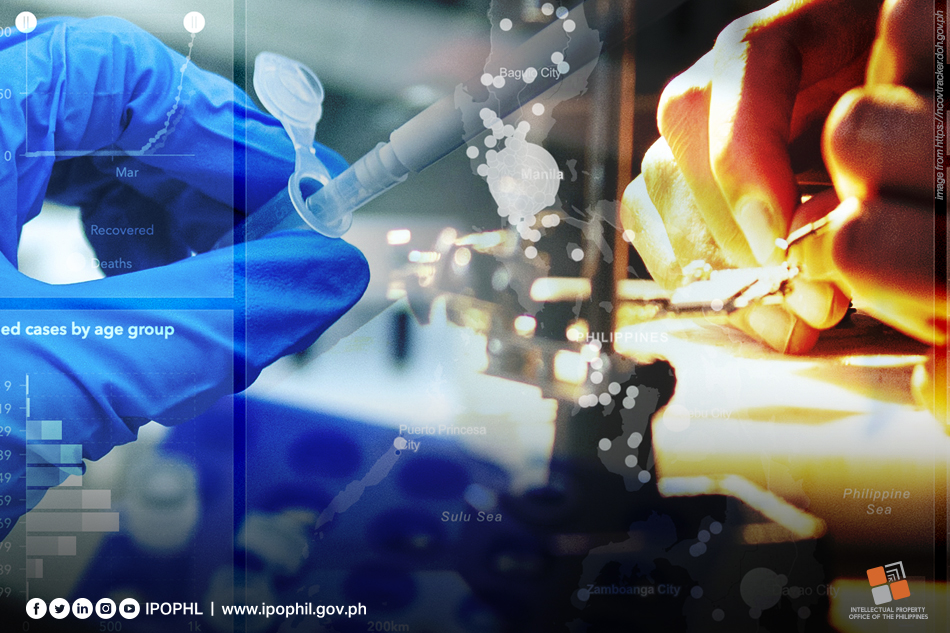 Once again, Filipino ingenuity and our bayanihan spirit rose to the occasion in the midst of dwindling supplies in a public health battle.

Among those who served as beacons of hope were partners of the Intellectual Property Office of the Philippines (IPOPHL) such as the Department of Science and Technology (DOST) and universities and colleges that housed Innovation and Technology Support Offices (ITSO).

Below is a compilation of some of the locally-made innovations that shined through in holding the hopeful promise of conquering the COVID-19 outbreak:

The University of the Philippines-National Institutes of Health (UP-­NIH) COVID-19 diagnostic kit was one of the first COVID-19 breakthroughs celebrated in the local scene and is expected to officially launch in the market this week.

Developed in February 2020 with funding from DOST, the UP-NIH test kits, also called the GenAmplify™ COVID-19 rRT-PCR Detection Kit, cost only around P1,320 per test, a stark contrast from that of foreign kits which cost around P8,500 per test, according to UP President Danilo L. Concepcion.

The GenAmplify™ kits are hoped to satisfy local needs for testing. Manila HealthTek, Inc., the manufacturer, can produce around 200 GenAmplify™ kits a week, an amount sufficient for about 6,000 tests. The Department of Health (DOH) is initially requiring a supply that is adequate to test 20,000 more. UP-NIH, PGC, and Manila HealthTek, Inc. have committed to fill in this demand.

Face masks and shields, with some even reusable

The following are the efforts of various ITSOs to provide alternative face shields—some of which are plastic-based, thus, may only require disinfection with alcohol to be reused:

Faculty members and students at ITSOs are also beating their brains out on how to supply full-body protective gears to medical frontliners to minimize their exposure to the disease.

UP Cebu has mobilized its Fabrication Lab to prototype, develop, and produce personal protective equipment (PPE) to our medical frontliners. The team has begun production of laser cut face shields while calling on the Cebuano community’s support to eventually produce a full-body gear.

Meanwhile, CapSU has provided 90 PPE sets within medical centers and hospitals in Capiz.

In the face of the grave scarcity for this basic, household product which was tagged as an effective disinfectant against COVID-19, researchers in universities produced their own versions of ethyl alcohol.

The Research and Innovation Team of NORSU developed a handsprayer you don’t have to press, hence, sanitizing without contaminating

The university is looking at producing it mass-level for installation at hospital entrances, hotel lobbies, malls, school entrances, banks, government offices and other business establishments.

TUP’s Quality Assurance Team in Manila fabricated and donated 24 sets of acrylic aerosol boxes which are used as shields by medical practitioners while intubating patients to minimize COVID-19 aerosol exposures. Two sets were each allocated to 12 select hospitals in Metro Manila.

Gladly, the lack of ethyl alcohol did not suppress the possibility of disinfecting a whole body, 360 degrees, from head to toe. Several universities like the Mapua University and the MSU proved this with their roles in creating mobile disinfection chambers.

Businesses and government agencies can install these disinfection chambers at the entrances of their buildings or establishments to minimize the risk of entrants in spreading the disease.

The Quezon City government is now in partnership with USHER Technologies Inc. — a spin-off company from Mapua and supported by DOST’s Philippine Council for Industry, Energy, and Emerging Technology Research and Development — for the latter’s fabrication of a full-body disinfection chamber.  For this technology called the Anti-Corona Chamber or GOCLEAN Chamber, USHER has a pending application for utility model protection at IPOPHL.

“The mobile disinfection chamber will initially have a thermal scanner, cough sound detection and disinfection (mist and fog) system. The next features will be a breathing pattern and facial recognition system for security purposes. It is the goal of the project to fabricate the mobile chamber in few weeks’ time and will be tested in various government buildings in the city. If successful, it is the intention of the partnership to share the design and details to other LGUs and the national government for a wider deployment scale,” USHER said on a Facebook post.

Meanwhile, a team of engineers and researchers at the MSU-IIT developed a disinfection cabin which they said they took inspiration from Vietnam’s mobile sterilization chamber.

MSU-IIT’s disinfection cabin will soon be deployed in select areas of Iligan City. The university has shared a design and installation guide to encourage more production of the much-needed solution.

The Eastern Visayas State University (EVSU) has produced a drink that combines all the nutrients needed to boost one’s immunity against COVID-19.

The product, named ExCITE which stands for “Extinguishing Communicable Infection Through Edible plant source,” is a freshly made drink made from carrot extract, moringa and calamansi juice. These ingredients make the drink rich in vitamin C, potassium, beta-carotene, calcium, and iron while containing trace amounts of protein.

EVSU is targeting to produce 2,500 330ml bottles of ExCite soon to be available in the next few days. Production may increase depending on the availability of the needed raw agriculture products.

Given the skills and technical knowhow of the talents they harbor, higher education institutions have all the potential to address society’s issues by creating and developing high-impact technologies.

As such, IPOPHL has been partnering with universities and colleges to house these so-called ITSOs which assist innovators from patent search and drafting services to the prosecution of patent applications. IPOPHL had envisioned ITSOs to contribute to the country’s economic and technological development by enabling them to harness the patent system so as to convert their high-quality research into concrete solutions.

This article may not have captured all the anti-COVID-19 solutions developed and created by above-mentioned universities or of our entire circle of ITSO partners — now at 100 — many of which are launching various efforts, including volunteer and charity work, simultaneously.

We recommend that local governments, organizations, or individuals, eyeing to utilize aid from these ITSOs or willing to further their solutions by donating financial resources or raw materials, contact them directly with the help of this directory map.